Treasures from the House of Alba: 500 Years of Art and Collecting

For more than five hundred years, the Alba family has formed part of the most important aristocratic lineages in Europe, not only because of its military, political, and social significance, but also due to the relevance of its cultural patronage and its art collecting. Treasures from the House of Alba: 500 Years of Art and Collecting will display some of the finest examples from this collecting tradition, from the fifteenth and sixteenth centuries up to the end of the twentieth century, in a display of continuity unparalleled by other large European collections.

Currently, the Alba family keeps its collections of paintings, sculptures, antiquities, furniture, tapestries, and all types of decorative art in three splendid palaces that historically belong to the lineage. The first of them is the Liria in Madrid, a building from the eighteenth century designed by Ventura Rodriguez, the interiors of which, destroyed in the civil war, were beautifully reconstructed by Sir Edwin Lutyens in the middle of the twentieth century; the second palace is the Dueñas in Seville, a magnificent Renaissance/Mudejar construction from the sixteenth century, the most important in this style preserved in Spain; the third is the splendid Monterrey in Salamanca, a masterpiece of the Spanish Renaissance, designed by Rodrigo Gil de Hontañón in the middle of the sixteenth century.

The exhibition displays a broad selection of works by these artists that, as such, are leaving Spain for the first time and groups them, also for the first time, in a manner that explains the historical development of the family and the collection from the end of the fifteenth century to the present day. It is the first exercise in the understanding of the history of this family, shown through a vast display of more than 130 objects.

The exhibition will be presented thematically, with sections marking significant periods of collecting within the history of the family. “Knights, Soldiers, Courtiers: The Great Duke of Alba in the Service of the Monarchy” looks at the origin of the dynasty, and in particular Don Fernando Alvarez de Toledo, the 3rd Duke of Alba and a central figure of sixteenth century Europe. This central figure of sixteenth century Europe, was a prominent noble, general and diplomat, best known as the Great Duke of Alba. An adviser to both King Charles I of Spain and Philip II of Spain, Alba was known for his loyalty to the Monarchy. The family’s early fifteenth-century bible, an illustrated manuscript comprised of 513 folios, will be a featured in this section.

“Magnificence and Power: The Baroque Collection of the Alba Family in the Golden Century” focuses on the House of Alba’s connection to the families of Monterrey, Veragua and, above all, Carpio, great collectors of European Baroque paintings, a large part of whose collections were passed on to the Duchy of Alba, among them the extremely important series of Christopher Columbus documents – manuscripts in the explorer’s hand showing his very first map of the New World and listing the sailors accompanying his voyage – and a fine Flemish tapestry by Willem de Pannemaker.

The Stuart family, descending in a direct line from James II of England/James VII of Scotland, through the Duke of Berwick, became related to the Bourbon family and the Alba lineage in an ever-increasing manner starting in the early eighteenth century. A large part of the portraits from this century owe their origin to this union; “Stuart-Berwick-Alba: The Union of Two European Lineages in the Eighteenth Century” will present highlights from this period.

“Francisco de Goya and the Duchess of Alba” concentrates on the famous Duchess Doña Teresa Cayetana, number thirteen in the lineage, whose portrait was painted many times by Francisco de Goya y Lucientes (1746-1828). She died without descendants, and the Alvarez de Toledo surname was lost. The Berwick family then inherited the title, and the family went on to carry the Fitz-James Stuart surname, which they retain. The relationship between Doña Teresa and Goya and its fantastic artistic results, as well as the change in the family with regard to estates and properties, makes this the central time period of the exhibition.

In the early nineteenth century, with the family having lost a large part of its historic collections, Duke Carlos Miguel was the one who decided to reconstruct the collection, as a private studio and, at the same time, as a painting and sculpture gallery. A learned nobleman, he embarked on a Grand Tour of Europe and accumulated an immense collection of canvasses, sculptures, pictures, drawings, and antiquities, forming the basis of what is currently kept in the Berwick-Alba collections. Highlights from “The European Collection of Carlos Miguel Fitz-James Stuart, Duke of Berwick and Alba” include a moving painting by Jusepe de Ribera (1591-1652), Crowning with Thorns (c. 1620), and a self-portrait by Anton Raphael Mengs (1728-1779).

Another very important part of the collection comes from the legacy of Eugénie de Montijo, Empress of France and wife to Napoleon III, sister-in-law and aunt to two Dukes of Alba. Upon her death in Madrid in 1920, her collections of paintings, furniture, and works of art were passed on to the latter of the two dukes, Don Jacobo Fitz-James Stuart y Falcó, the 17th Duke of Alba and father of the current duchess. A noblewoman of Andalusian origins and Empress of France, her collections featured in “Seville-Paris-Madrid: The Empress Eugénie de Montijo and the House of Alba” reflect her taste for a romantic image of Spain, in addition to the Neo-Baroque of the Second Empire. Examples include a delicate fan bearing her likeness and a stunning gilt table.

In the final section of the exhibition, “Great Portraits and the Contemporary Collection: Jacobo Fitz-James, 17th Duke of Alba, his Daughter Cayetana, 18th Duchess of Alba and the Arts,” the family’s collecting activity is a very important episode. The acquisitions of the 17th Duke of Alba, Jacobo, and his daughter, Cayetana, who bore the title until her passing in November 2014, include works by classic artists such as Rubens and Antonio Moro; modern works by Spanish artists such as Zuloaga, Benlliure and Sert; and works by foreign artists such as Guardi, Reynolds, Renoir, Fantin-Latour, Courbet, Boudin, and Picasso. The reconstruction of the Liria Palace in the middle of the twentieth century and the current splendor of the collections are thanks to their efforts.

This exhibition is co-organized by the Meadows Museum and the Casa de Alba Foundation. A generous gift from The Meadows Foundation has made this project possible. It is part of the Museum’s Golden Anniversary, which is sponsored by The Meadows Foundation, The Moody Foundation, the Dallas Tourism Public Improvement District and the Dallas Convention & Visitors Bureau. Media sponsorship has been provided by The Dallas Morning News. This exhibition is supported by an indemnity from the Federal Council on the Arts and the Humanities.

2015
International Symposium
Alba: Lives and Afterlives of a Historic Collection 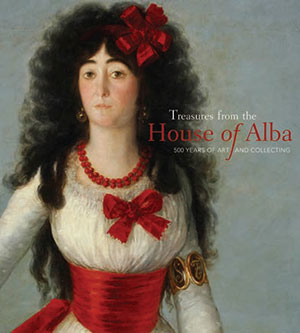