From the Temple and the Tomb: Etruscan Treasures from Tuscany

As part of next spring’s Dallas-wide celebration of ancient civilizations of the Mediterranean, the Meadows Museum will honor the 15th anniversary of SMU professor P. Gregory Warden’s groundbreaking archaeological excavation in Poggio Colla, Italy with an exhibition dedicated to the great ancestors of Rome: the Etruscans. From the Temple and the Tomb will be the most comprehensive exhibition of Etruscan art ever undertaken in America, with more than 300 objects spanning the 9th through 1st centuries B.C.

The Etruscans were legendary in the ancient world for their wealth, their religiosity, and the extraordinary freedom and power of their women. They were also, along with the Greeks and Phoenicians, one of the three great powers of the ancient Mediterranean until all were conquered by the Romans in the 3rd and 2nd centuries B.C. This ancient civilization also greatly influenced the Romans. Yet, at least in the popular imagination, the Etruscans remain shrouded in mystery. While their language has been deciphered, there is still lively debate about where the Etruscans themselves originated.

Another reason for the mystery surrounding them is that almost all surviving materials come either from funerary context, giving the impression that the Etruscans were obsessed with death and the afterlife, or from sanctuaries, reinforcing the idea that the Etruscans were, as the historian Livy put it, “the most religious of peoples.” What remains of this vibrant civilization literally comes from “the temple and the tomb.”

The Florence Archaeological Museum holds what is arguably the finest collection of Etruscan art in the world, and some of the choicest objects from its collection will come to the Meadows. These extraordinary objects illustrate every aspect of Etruscan life and afterlife over almost a thousand years. The Etruscans were ruled by a theocratic elite that controlled every aspect of Etruscan life; priest/magistrates were believed to be skilled at interpreting the will of the gods. The exhibition will include ritual objects, such as votive bronzes offered to the gods in sanctuaries, or objects used for interpreting the will of the gods, such as the still-mysterious Magliano lead disc. The exhibition also will include an entire temple pediment—the terracotta decoration for the front of an Etruscan temple—showing that the Etruscans were masters at working terracotta as well as bronze (the Etruscan skill at creating decorative objects in bronze was much admired by the Greeks, and adapted by the Romans). Additionally, a multitude of objects will be shown from Etruscan tombs: sarcophagi and ash urns, guardian animals and demons, as well as the splendid gold, silver, bronze, ivory, and ceramic objects that were deposited in the tombs of the wealthy. Especially impressive is the gold jewelry, so technically advanced that it is difficult to reproduce today.

Etruscan art reveals an incredible variety of styles, ranging from naturalistic depictions that foreshadow later Roman portraits to abstracted figures that look so remarkably un-classical they might have been done in the 20th century A.D. rather than the 6th century B.C. This important collaboration with the Florence Archaeological Museum will introduce Meadows visitors to the liveliness and vigor of Etruscan art, bringing to life a vibrant but lost culture at the heart of the Mediterranean tradition. 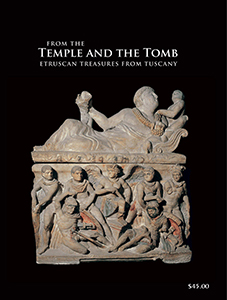