Past Exhibitions – Manet to Miro

From Manet to Miró: Modern Drawings from the Abelló Collection

This special exhibition features 65 drawings by some of the most important artists of the last two centuries, including Manet, Degas, Dalí and Miró. The drawings are from the extensive holdings of one of Spain’s most important private collections, that of Juan Abelló and his wife, Anna Gamazo. Ranking among the top 200 collectors in the world, the Meadows exhibition will mark the first time the Abelló collection has been shown in the United States.

The selection of works featured in From Manet to Miró spans the history of modern and contemporary drawing, starting with Goya and ending with Lucien Freud. The exhibition is particularly strong in its focus on the last third of the 19th century and first half of the 20th century, covering the epic period of avant-garde movements from roughly Post-Impressionism to Surrealism. In addition, Spanish artists from this period are well-represented in the exhibition. Many of them, including Juan Gris, Miró, Julio González, Dalí and Óscar Domínguez, achieved international renown; others, though perhaps not of such international standing, were undoubtedly cosmopolitan in their outlook, including Iturrino, Gargallo, Manolo Hugué and María Blanchard. The artists Joaquín Torres García and the Cuban Wifredo Lam also are featured in the exhibition and, although not of Spanish birth, they established strong artistic ties with the country.

As the title of this exhibition suggests, Abelló’s holdings are particularly strong in the work of the French Impressionists, with drawings by Manet, Degas (including a splendid pastel of a woman drying herself after a bath), Cassatt, Pissarro and Renoir. Although the pioneers of this movement left tradition behind with their broken brushstrokes, depictions of everyday life and careful rendering of light with paint, most had still undertaken rigorous academic training and were excellent draughtsmen; they were equally skilled with pencil and brush, paper and canvas. This wide-ranging talent is also evident in the exhibition through the great pioneers of 20th-century art, beginning with the Post-Impressionists Gauguin and Van Gogh, and moving forward to include Toulouse-Lautrec, Bonnard, Klimt, Schiele, Matisse and Van Dongen. A testament to artistic versatility, Van Gogh’s pencil and black chalk drawing titled Head of a Peasant Woman is a particularly beautiful and empathetic display of the artist’s skill as a draughtsman and in a technique that differs significantly from his thick, energetically swirling paintings. Meanwhile the delicately drawn fragile female nudes of Klimt, Schiele, Matisse and Modigliani offer a glimpse of the confrontational abstraction to come with modern art as the 20th century progressed.

With the aforementioned outstanding group of names, the exhibition encourages visitors to appreciate principal avant-garde movements such as Cubism, Expressionism and Abstraction in a different way. A series of drawings by great sculptors (Maillol, Brancusi, González, Moore and Giacometti) reveal that, as Degas claimed, drawing is not form but the way of seeing form. From Manet to Miró is in keeping with the Meadows Museum’s commitment to fostering visitors’ appreciation of varied media, including works on paper and drawing, as exemplified by the 2003 exhibition Spanish Master Drawings from Dutch Collections (1500 – 1900), which featured works by Ribera, Murillo and Goya, among others. That exhibition, organized by the Boijmans-Van Beuningen in Rotterdam and the Meadows Museum, set a standard for fruitful international collaborations, of which the present exhibition is a result. Through the installation of intimate works by modern masters, often featuring subjects rarely seen in the artists’ paintings, the visitor is invited to meet familiar figures with new eyes and connect to the artists’ personal rather than public or commercial endeavors, their training, skill, versatility, spontaneity and creative process. From Manet to Miró offers a synthesized but clear summary of the richness and complexity of modern art.

This exhibition was organized by the Museo Thyssen-Bornemisza, the Meadows Museum, and the Abelló Collection and has been brought to Dallas by a generous gift from The Meadows Foundation. 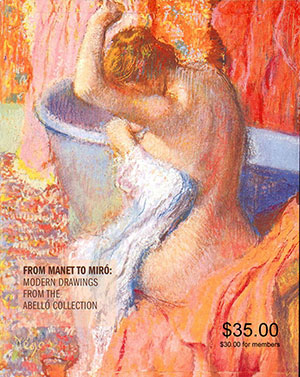