The Lost Manuscripts from the Sistine Chapel: An Epic Journey from Rome to Toledo

In the waning years of the 18th century, Napoleon Bonaparte’s military prowess enabled him to lead the French army to Italy, where he victoriously occupied Rome in 1798. The cobblestone streets of the Eternal City soon bore witness to a looting so widespread that even the Vatican was not immune, and eventually the Sacristy of the Sistine Chapel, perhaps the most famous chapel in the history of art, was stripped of its renowned collection of codices (illuminated manuscripts).

In this turbulent climate, one of Spain’s most prominent and illustrious religious leaders—Cardinal Francesco Antonio José de Lorenzana y Buitrón (1722- 1804), Archbishop of Toledo, Primate of Spain, and Ambassador of King Charles IV to the Holy See—boldly took the initiative to preserve a portion of the Sistine Sacristy Collection before it was scattered any further. In 1798, he negotiated the acquisition of a magnificent ensemble of codices which he subsequently donated for posterity to the Biblioteca Capitular de Toledo in Spain.

A large number of these codices have recently been catalogued and studied in depth at the Biblioteca Capitular de Toledo as well as two other major Spanish institutions: the Biblioteca de Castilla-La Mancha in Toledo and the Biblioteca Nacional de España in Madrid. Remarkably, many are in perfect condition. They provide an unparalleled opportunity for scholars to reconstruct the splendor of one of the most valuable collections of the papal liturgical heritage.

In January 2011, the Meadows Museum welcomes The Lost Manuscripts from the Sistine Chapel: An Epic Journey from Rome to Toledo, an exhibition organized through partnerships with the Centro de Estudios Europa Hispánica, the Biblioteca Nacional de España, the Biblioteca de Castilla-La Mancha, the Catedral de Toledo, and the Palacio Arzobispal de Toledo. Curated by two Italian scholars, Dr. Elena De Laurentiis and Emilia Anna Talamo, this exhibition spotlights the Sistine Sacristy Collection by showcasing over 40 of the finest codices purchased by Lorenzana in 1798, most of which have never before been on view.

The books were illustrated using the finest materials available to the papal scriptorium (the manuscript workshop) and range in date from the 11th to the 18th century. Together they encompass a breadth of the standard liturgical writings used by the Catholic Church—including benedictionals, blessings, breviaries, epistolaries, evangelistaries, missals, and preparations for mass—and include both complete and reused codices (manuscripts in which folios from other manuscripts have been inserted). Not surprisingly, the artistic and political considerations in their production are equally compelling.

On the artistic level, a diversity of styles will be displayed in the exhibit. An overall highlight is the Missal with Christmas Mass of Cardinal Antoniotto Pallavicini (Biblioteca Nacional de España, Madrid). Datable to between 1503 and 1509, and generally regarded as one of the richest codices from the Sistine Sacristy Collection, it is not only exquisitely rendered but has a fascinating history. Several other missals also underscore the presence of complex decorative schemes executed, or at least influenced, by master illuminators of the papal scriptorium, such as Vincent Raymond (French, active c.1535-1557) and Apollonio de’ Bonfratelli (Italian, c.1480/1520-1575). Even the roles of calligraphers and copyists such as Niccolò Raimondi (Italian, active 17th century), primarily concerned with the transcription of the text, are explored within the context of overall production.

A number of the high Catholic Church figures who commissioned these works are of similar interest, albeit on an ecclesiastical level. These dignitaries—including bishops, archbishops, cardinals, and popes alike—are omnipresent on the pages of the codices through the repeated inclusion of their coats-of-arms. The result is an intriguing 200-year record of papal use and ownership stretching from the pontificates of Pope Paul II (r. 1464-1471) and Pope Clement VII (r.1523-1534) through the time of Pope Urban VIII Barberini (r.1623-1644).

A catalogue of the exhibition will provide profiles of these mostly unpublished codices along with scholarly analyses by the curators and details of their epic journey from Rome to Toledo, where they continue to be under the ownership of the Catholic Church. The catalogue is being prepared by the Centro de Estudios Europa Hispánica and will be published in English, Spanish and Italian.

Lost Manuscripts from the Sistine Chapel to be on View in the United States for First Time
artdaily.org, October 16, 2010

How Lost Sistine Chapel Manuscripts Found Their Way to the Meadows
dmagazine.com, January 31, 2011 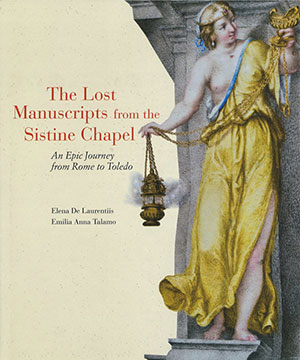