Human/nature: The Ridiculous and Sublime: Recent Works by John Alexander

This spring, the Meadows Museum will honor one of SMU’s own with an exhibition of works by artist John Alexander. Featuring a focused selection of works, including both paintings and drawings, the show will consider the past decade of the artist’s career, with an eye to the cast of characters—both humans and animals alike—that Alexander employs with frequency. Seemingly relatable at first glance, the compositions become increasingly complex as multiple meanings, both humorous and dark, emerge with prolonged examination.

A native Texan, Alexander was born in 1945 in Beaumont, a port city on the Gulf of Mexico; he remained in southeast Texas until he applied to and was accepted into SMU’s M.F.A. program in 1970. During his graduate career at SMU, Alexander spent time working at the Meadows Museum under the direction of William B. Jordan, the recently appointed museum director, and chair of the SMU a rt department. It was here that, among other masterpieces, Alexander gained unique access to Spanish artist Francisco de Goya’s four complete print series, which are part of the Museum’s permanent collection. There is no doubt that the many hours Alexander spent in intimate proximity to these works at the Meadows influenced his subconscious, and ultimately, his oeuvre. Alexander would take from the Spanish artist the ability to satirize the world he saw around him, and meld it with his own Texan sensibility.

While the works on display at the Meadows Museum will focus on the past decade, they are representative of the artist’s trajectory as a whole.  A consummate draftsman, Alexander’s drawings demonstrate an innate understanding of his chosen subject. These drawings go beyond a talented rendering, and while exquisite in their own sense, they create a fundamental starting point for the figures that appear within the artist’s paintings. It is in this manner that Alexander’s characters are created by a unique combination of studied observation and subconscious intuition. They develop from the artist’s psyche, but once complete, they assume identities of their own, independent from the artist. Under Alexander’s brush, no creature is assured an escape from folly, and human nature begins to mirror the untamed. 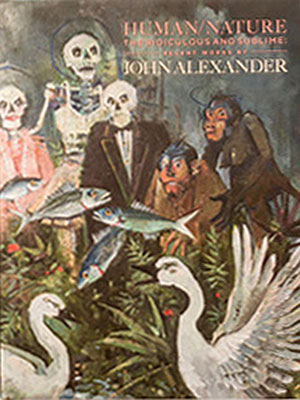