The Prado at the Meadows: El Greco Pentecost in a New Context

The multifaceted collaboration encompasses the loan of three major paintings from the Prado, interdisciplinary research at SMU, an unprecedented fellowship exchange between the two museums, and a range of public programs.

Under the scientific direction of Dr. Mark Roglán, director of the Meadows Museum, and Dr. Gabriele Finaldi, deputy director of Conservation and Research at the Prado Museum, each loan will come to Dallas individually for a four-month-long period beginning in September of the years 2010, 2011 and 2012. The loans will include: El Greco, Pentecost, 1596-1600 (September 12, 2010-February 6, 2011) with guest curator Dr. Leticia Ruiz Gómez, head of the Department of Spanish Painting until 1700, Prado Museum; Jusepe de Ribera, Mary Magdalene, 1640-41 (September 18, 2011-January 15, 2012) with Dr. Gabriele Finaldi as guest curator; and Diego Velázquez, Philip IV, 1623-27 (September 16, 2012-January 13, 2013) with guest curator Dr. Javier Portús, chief curator of Baroque Spanish Painting, Prado Museum.

The Meadows Museum will produce a bilingual publication presenting new research related to the works’ historical context, theological or philosophical implications, condition and conservation, provenance, attribution and literary connections. The museum also will organize a symposium with national and international scholars, along with educational programming, for each of the loans.

In the fall of 2011, the two museums will initiate a fellowship, an annual exchange with one appointment made by each institution. It will be the first curatorial internship ever to be mounted by the Prado with a foreign institution. Sponsored by the Meadows Museum, the internships will provide graduate students with the opportunity to gain professional and international experience, and to work closely with the curatorial staff at each institution.

After frequent visits to Madrid in the 1950s, museum founder Algur H. Meadows had a vision to establish “a small Prado in Texas,” and built an incredible collection of Spanish art that forms the foundation of the museum today. This new partnership is another step in realizing his aspiration. It represents a natural extension of the existing relationship between the two museums, as the Meadows has often lent works to special exhibitions at the Prado and collaborated on research.

“This special collaboration with the Meadows Museum will bring three of the finest works in the Prado’s collections to a new audience in the United States, where they will each be shown in a new and revealing context,” said Miguel Zugaza, director of the Prado Museum. “I am greatly looking forward to this project.”

This exhibition and project have been organized by the Meadows Museum, Southern Methodist University and the Museo Nacional del Prado, and are funded by a generous gift from The Meadows Foundation.

Why The Meadows’ El Greco Exhibitions Are About So Much More Than the Pentecost
dmagazine.com, September 22, 2010 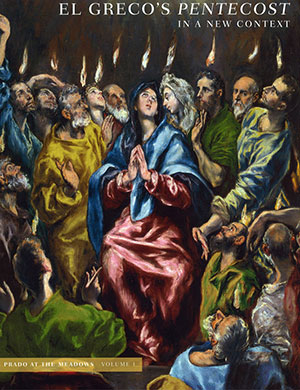