Born in 1903 in Turégano, near Segovia, Esteban Vicente studied sculpture at the Royal Academy of Fine Arts of San Fernando in Madrid. Not long after completing his studies at the academy in 1924, Vicente abandoned sculpture in favor of painting. In 1929, he left Madrid for Paris, where he met Picasso and was introduced to the art of Cézanne, Matisse and Braque, which he had seen in Spain only as reproductions. Vicente divided his time between Paris and Barcelona until 1936, when the Spanish Civil War broke out. Although he had been preparing to relocate to New York, he was now determined to fight with the Loyalists in Madrid. In light of the weapon shortage, however, Vicente was told he could better serve the Republican cause in America, and moved to New York in that same year. At the behest of Fernando de los Ríos, the Spanish ambassador to the United States, Vicente served in the Spanish consulate in Philadelphia from 1937 until the Spanish Civil War’s end in 1939. He then moved back to New York, which would remain his home until his death in 2001.

In New York, Vicente painted traditional portraits and landscapes until the early 1940s. He made a conscious decision at that point to stop showing his art for a period in order to understand the work of the Abstract Expressionists, with whom he began to associate. Finally, Vicente’s breakthrough came when his work was selected by art critic Clement Greenberg and art historian Meyer Schapiro for inclusion in the Talent 1950 exhibition at the Samuel Kootz Gallery. Vicente continued to experiment with Abstract Expressionism for some 20 years and at one time shared a studio with Willem de Kooning.

Over the course of his career, Vicente also taught art at several universities, including the University of Puerto Rico, Black Mountain College, New York University, Yale University and the University of California at Berkeley. While teaching at these institutions, away from his New York studio, Vicente found himself unable to paint. It was while teaching at Berkeley in 1949 that he decided to begin experimenting with collage. Initially he used supplements from San Francisco newspapers. He then began painting handmade paper, which he would manipulate on a canvas surface. Vicente called his collages “paintings on paper,” and they became a fundamental part of his artistic focus.

Concrete Improvisations: Collages and Sculpture by Esteban Vicente will feature approximately 80 of the artist’s works, both collages and polychrome sculptures, which Vicente referred to as divertimientos or juegos, (“toys” in English). Vicente’s “toys” display his thorough understanding of Cubism, Constructivism and assemblage. Together, this group of works will reveal interesting facets of the career of this accomplished, if unassuming, artist.

This exhibition is curated by Dr. Lynn Gumpert, director of New York University’s Grey Art Gallery, Dr. Ana Martínez de Aguilar, director of the Museo de Arte Contemporáneo Esteban Vicente, Segovia, and Dr. Edward J. Sullivan, the Helen Gould Sheppard Professor of the History of Art at NYU. It is the most important and largest monograph exhibition of Vicente’s collages to date. The exhibition will be accompanied by a fully illustrated catalogue. Concrete Improvisations will be on view at the Meadows Museum from May 15-July 31, 2011, after its initial showing at NYU’s Grey Art Gallery from January 11-March 26, 2011. Following the Meadows, the exhibition will make its third and final stop at the Museo de Arte Contemporáneo Esteban Vicente, Segovia. The Harriet and Esteban Vicente Foundation, the Whitney Museum of American Art and the Museo Nacional Centro de Arte Reina Sofía are among the institutions generously lending works to this exhibition.

Concrete Improvisations: Collages and Sculpture by Esteban Vicente has been organized by the Grey Art Gallery, New York University; the Museo de Arte Contemporáneo Esteban Vicente, Segovia; and the State Corporation for Spanish Cultural Action Abroad, SEACEX. It is made possible, in part, by the generous support of The Harriet and Esteban Vicente Foundation. Generous financial support has also been provided by The Meadows Foundation.

An exhibition running at the same time is Esteban Vicente in America: Collage, Color, and Somewhere in Between. 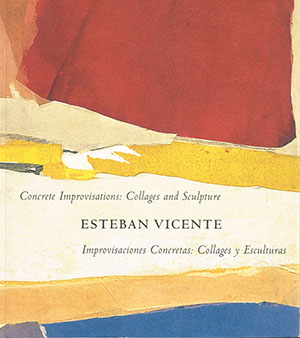