Modern Spanish Art from the Asociación Colección Arte Contemporáneo presents the most comprehensive survey of Spanish modern art to be shown in the United States in 50 years. The exhibition, which features more than 90 works of art dated from 1915-1960 by approximately 50 artists, is drawn predominantly from the Asociación Colección Arte Contemporáneo (ACAC),one of the most significant repositories of Spanish modern art in the world, with select masterpieces from the renowned collection of the Meadows Museum. The collaboration and exhibition mark the first time many of these works will travel to the U.S., and the first opportunity for American audiences to experience the exceptional breadth and depth of the ACAC’s modern art collection.

The ACAC, which was formed in 1987 by a group of private companies in Spain, offers the only complete visual narrative of the development and evolution of Spanish art, from the beginnings of modern art to the present, through the work of many of the most important artists of the time. Leveraging the exceptional scope of the ACAC, the exhibition explores five distinct trajectories taken by Spanish artists of this period. Among the artists featured are Eduardo Chillida, Óscar Domínguez, Pablo Gargallo, Julio González, Antoni Tàpies, Joaquín Torres-García, Josep de Togores, and Jorge Oteiza, who were little appreciated in their time but today have found international acclaim; Rafael Barradas, Leandre Cristòfol, Ángel Ferrant, Alberto Sánchez, and José Guerrero, who influenced the practice of their contemporaries in the U.S. and Spain alike; and artists, who—though critical to the history of modern art—remain lesser-known, including Alfonso Olivares and Martín Chirino. Works by these artists, and many more, are further augmented with masterpieces by some of the most famed Spanish modern artists, drawn from the collection of the Meadows Museum, including Salvador Dalí, Juan Gris, Joan Miró, and Pablo Picasso.

This exhibition has been organized by the Meadows Museum and the Asociación Colección Arte Contemporáneo in collaboration with Acción Cultural Española. BBVA/Compass is the main Supporting Corporate Sponsor, with the special collaboration of Técnicas Reunidas, S.A.; Fundación Aon España; Fundación ACS; and Gas Natural Fenosa. A generous gift from The Meadows Foundation has made this exhibition possible. 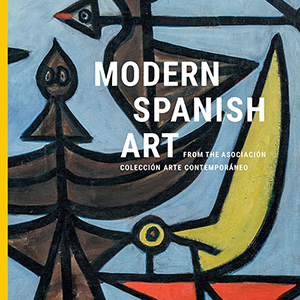