Recently the National Gallery of Art in Washington, DC, generously agreed to the long-term loan of an important painting by Mariano Fortuny y Marsal (1838–1874): The Choice of a Model (1868–74). In honor of this prestigious loan, the Meadows Museum will host an exhibition dedicated to Fortuny and his world, drawing from its rich holdings of works on paper as well as key loans from private and public collections, including the Dallas Museum of Art and the Museum of Fine Arts, Houston, in order to showcase many of the friends, family, and followers who engaged with the popular Spanish painter’s work. Fortuny’s paintings were especially prized by nineteenth-century American collectors as well as by contemporaneous artists. The legacy of that popularity resonates with the distinctly American provenance of both the Meadows’s Beach at Portici and the National Gallery’s The Choice of a Model, and their current ownership by American museums.

Though today Fortuny is lesser known outside the country of his birth, the Spanish painter was extremely popular in both Europe and the United States during his lifetime and well into the early twentieth century. Imitators of his characteristically proto-Impressionist, painterly style and eclectic, “exotic” genre scenes were so plentiful that their style came to be described with its very own “ism”: “Fortunismo” (Fortuny-ism). Fortuny: Friends and Followers explores that legacy by bringing together a diverse group of artists, including the important French artists Jean-Léon Gérôme (1824–1904), James Tissot (1836–1902), Jean Louis Ernest Meissonier (1815– 1891). Fortuny’s sphere of influence is explored through a variety of themes including intimate representations of family and home, trends of modern life in European cosmopolitan centers like Paris and Venice, cultural arts from Spain and beyond, and much more.

30-second advertisement for the exhibition 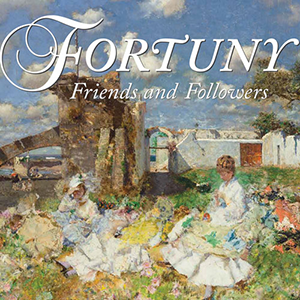