MEADOWS MUSEUM ACQUIRES LAST PAINTING OF SPANISH MASTER
MARIANO FORTUNY Y MARSAL
In the Private Collection of an American Family Since Fortuny’s Death, It Represented the Best of Foreign Art in the Americas at 1893 Chicago World’s Fair 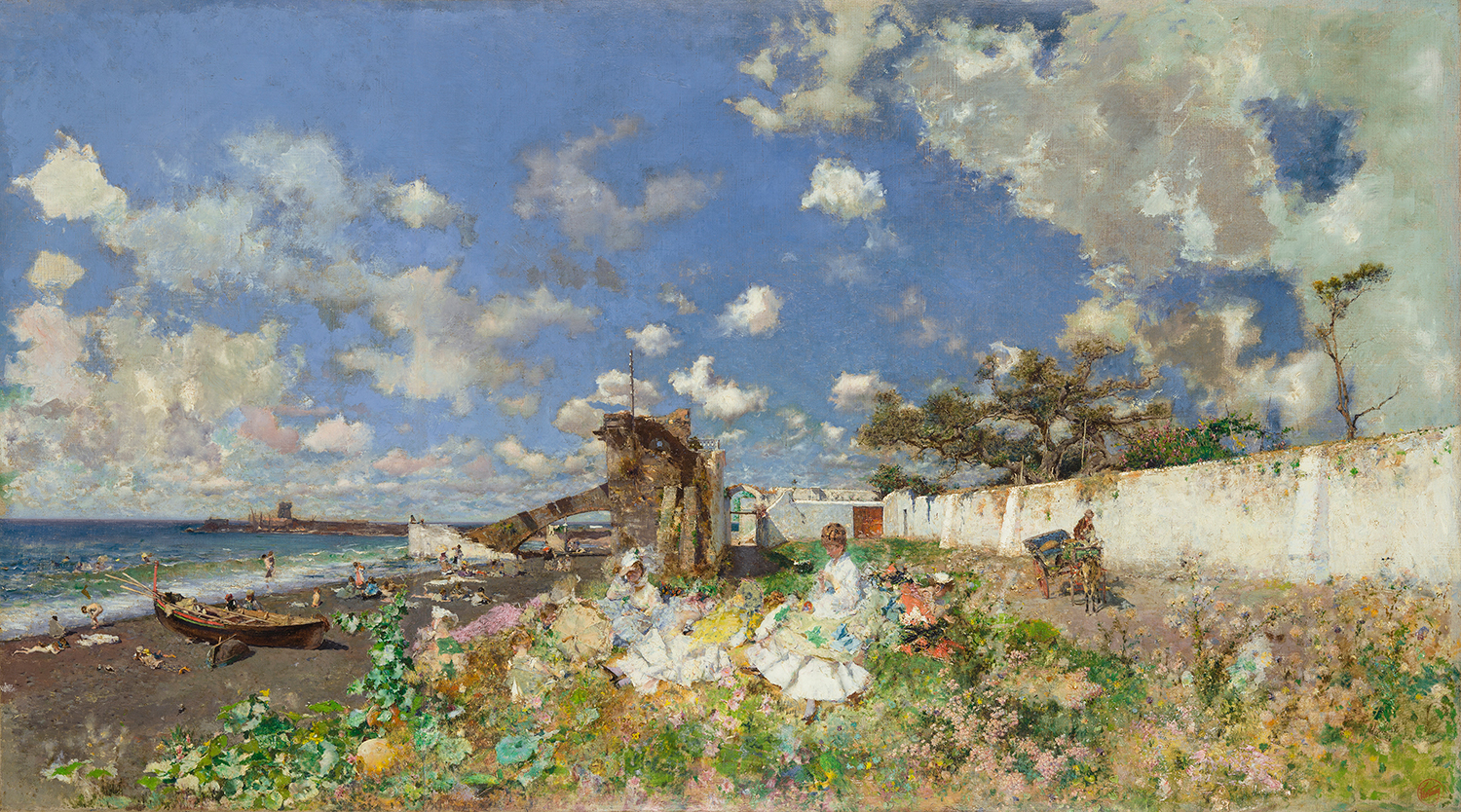 DALLAS (SMU), January 18, 2018— The Meadows Museum, SMU, announced today that it has acquired Beach at Portici, the last painting of famed Spanish artist Mariano Fortuny y Marsal (1838-1874). The nearly finished painting—which is unusual for its large scale, relative to much of the artist’s work—depicts the enjoyment of a summer day at the beach, and demonstrates Fortuny’s hallmark ability to capture light in paint. Fortuny was an especially popular artist with 19th-century American collectors and audiences, as the particularly American provenance of this work reveals. Reflecting the high esteem in which Fortuny’s works were held, Beach at Portici was featured prominently in the American Pavilion’s “Loan Collection of Foreign Masterpieces Owned in the United States” at the 1893 World’s Columbian Exposition in Chicago. Considered one of the most important international exhibitions of the 19th century, these works were selected to show off to the Fair’s wide audiences— more than 27 million people visited during its six-month run—the richness and breadth of paintings owned by American collectors and museums, and implicitly, American economic prowess, and refined taste in fine art.

Beach at Portici will be on view at the Meadows Museum beginning January 19, 2018. From June 24 through September 23, it will be the subject of a focused exhibition, At the Beach: Mariano Fortuny y Marsal and William Merritt Chase, where it will be paired with a loan from the Amon Carter Museum of American Art, Chase’s Idle Hours (c. 1894). The Spanish artist had a significant impact on many important American artists and perhaps especially on Chase, who knew his work well and greatly admired it.

In the artist’s possession at the time of his death, Beach at Portici was acquired by the prominent New York collector Alexander Turney Stewart in 1875, and remained with Stewart’s heirs on the East Coast until the Meadows acquired it. The acquisition complements the only oil painting by the artist currently in the Museum’s collection: a smaller, study composition for the painting of the same stretch of beach at Portici. The newly acquired painting includes essential elements of Fortuny’s developing style, such as the dynamically posed figures, the use of strong architectural elements in the background to define the space around the figures, brushwork that anticipates the rise of Impressionism, and meticulous attention to detail.

“Painted in Italy, sold in Paris after his death, and owned exclusively by American collectors in the decades since, Beach at Portici embodies the international character of Fortuny’s brief career,” said Mark Roglán, the Linda P. and William A. Custard Director of the Meadows Museum. “For these reasons, as well as its obvious beauty, it makes a perfect acquisition for the Meadows, addressing our mission to bring the best of Spanish art to American audiences, and to highlight its role in the development of America’s own culture and aesthetic.”

Beach at Portici demonstrates the evolution in Fortuny’s painterly technique as his career progressed, and highlights why his works were so celebrated and sought-after both during his lifetime and after his death. His landscapes capture the extraordinary beauty in everyday moments, and in this work—with the contrast between the extreme attention to detail in some places, such as the trees, beach, and ruins in the background, and his loose handling of paint in other areas, such as the foliage in the foreground of the painting—the viewer can see hints at how his style might have continued to develop had he lived.

Mariano Fortuny y Marsal was born in the Catalonia region of Spain and did his early training in Barcelona, before leaving for further study in Rome. He subsequently spent most of his brief working life in Italy or France, interwoven with travel in Morocco and other parts of North Africa, as well as in southern Spain. During his travels, Fortuny collected carpets, Hispano-Moresque pottery, Islamic metalwork, arms and armor, fabrics and textiles, all of which influenced both the style and subject of his work. His drawings and paintings of historical subjects—such as of the Spanish-Moroccan War (1859-1860), which he memorialized in the painting The Battle of Tetuan (1862-1864)—and his other depictions of 18th-century courtly life, were so popular that the term Fortunismo came to be applied to any artistic representation of those themes during this period. Despite his short life, he is known to have been very prolific.

With his wide-ranging travels and long history of working outside of his home country, Fortuny represents the first generation of truly cosmopolitan Spanish painters. Likewise, the development of his style parallels larger trends in Spanish painting, particularly in the context of European modernism. Fortuny’s works were equally popular in America during his lifetime and in subsequent decades and were acquired by a number of prestigious public institutions here including: the Museum of Fine Arts, Boston; the Harvard Art Museums; the National Gallery of Art, Washington, DC; the Walters Art Museum, Baltimore; and the Hispanic Society of America, New York City.

About the Meadows Museum

The Meadows Museum is the leading U.S. institution focused on the study and presentation of the art of Spain. In 1962, Dallas businessman and philanthropist Algur H. Meadows donated his private collection of Spanish paintings, as well as funds to start a museum, to Southern Methodist University. The Museum opened to the public in 1965, marking the first step in fulfilling Meadows’s vision to create “a small Prado for Texas.”

Today, the Meadows is home to one of the largest and most comprehensive collections of Spanish art outside of Spain. The collection spans from the 10th to the 21st centuries and includes medieval objects, Renaissance and Baroque sculptures, and major paintings by Golden Age and modern masters. Since 2010 the Museum has been engaged in a multidimensional partnership with the Museo Nacional del Prado in Madrid, which has included the exchange of scholarship, exhibitions, works of art, and other resources.